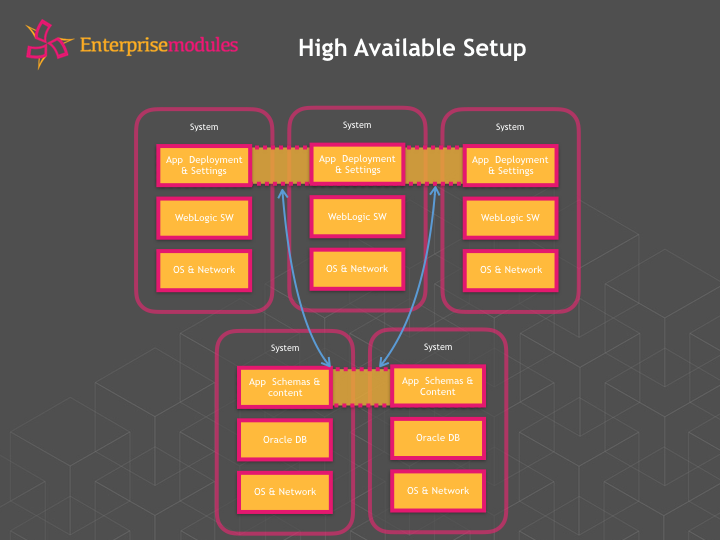 In this picture, we have drawn a High-Available setup for a WebLogic and Oracle system. Most larger enterprises use a setup like this for their production environment. But it is needlessly costly and resource hungry when you provide this setup for simple, functional tests. Or even worse, provide your developers with this setup. What if we could use the same Puppet code to install and manage the application setup on both this High-Available setup and all the other setups. This blog post shows you how to use Puppet roles and profiles to do just that.

The picture in the intro depicts a HA setup. For a developer, we would like to have a single machine containing all functions. For regular testing, we could use a setup where the database and the WebLogic functions are provided by separate systems. Here is a picture of both of the simpler setups. 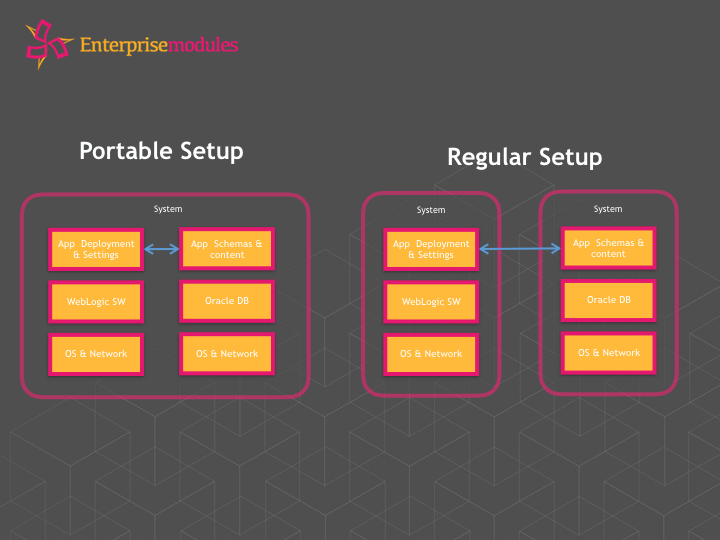 Craig Dunn introduced the concept of profiles and roles in his blog article Designing Puppet – Roles and Profiles. When he talks about roles, he says:

In our setup we see the following roles:

Let’s look into each of these roles.

This is a normal database server running on a single node. It runs the Oracle database processes. The Puppet code for this role, makes sure the database settings, tablespaces, users, schemas and content is managed.

This role describes the master node of a RAC cluster. RAC doesn’t know the concept of a master node, but for Puppet it is beneficial to have one of the RAC nodes be responsible for managing the content and settings of the databases.

As far as Puppet is concerned, this role is just a RAC database node. It doesn’t manage any of the content and other settings. Those are done by the master.

This is a standard WebLogic node. The Puppet definition for the role, manages the whole WebLogic setup including the definition of domains, managed servers, data sources, queues, and deployments.

This role, just manages the software, patches and directories on the machine. When creating the node, the domain configuration is copied from the master node. After this node is part of the WebLogic cluster, technical there is no difference with the master node. Still we use Puppet just to manage the master node and let WebLogic distribute the changes to the other nodes in the cluster. This allows us to easy scale the number of WebLogic servers.

Last, but certainly not least, is the portable role. This role contains everything. It contains a full running database with schemas and content and a full installed and configured WebLogic server. This role is extremely handy to provide fast and adequate development environments.

What about the profiles?

Unlike roles, which are named in a more human representation of the server function, a profile incorporates individual components to represent a logical technology stack.

If we look at our setups, we can see the following profiles:

How to fit them together?

In this blog post, we have provided you with the basic information on how to structure the different elements of this setup. In the next blog post, we are going to show you how to fit them together into multiple working setups.